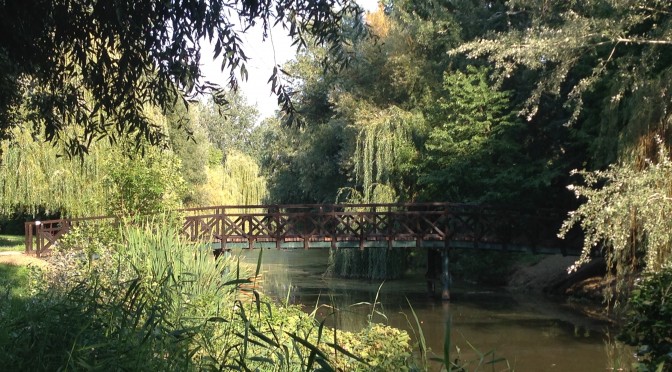 The street where I live is called Fó fasor (or Fo Alley); the dorm faces onto Temesvári Krt (Boulevard), but I look out on Fó. The dorm where I live, by the way, is named after Otto Herman (1835-1914), who, according to Wikipedia, was a zoologist, archaeologist, ethnographer, and politician. In other words, your typical 19th C. Renaissance man. Sorry about Wikipedia, but couldn’t find anything else about him. I did see his picture in the local museum, however, but couldn’t read what it said about him!

I’ve already mentioned the big park across Temesvári, through which I walk to the main part of town. This park seems to be variously called Erzébet Park or Liszt Ferenc Park, depending on where you look. The part of Szeged where I live, across the Tisza, is called Ujszeged, or “New Szeged.” As this suggests, it is the newer part of town. It is a rather leafy suburban looking place. When you walk around you can see lots of big nice houses, but they are (unlike many American suburbs) also intermixed with apartment buildings (probably condos, not rentals), businesses, and dorms (mine isn’t the only one). The Biology School of the University of Szeged is also over here; apparently most of the students in Otto Herman are biology students. More on the students later.

My street is lovely and leafy: It is lined with stately trees, and there is a wide walkway, which pedestrians and bicyclists share. Rather unnervingly, mopeds also drive on these pathways. One quickly learns around here that pedestrians stay on their side, if marked, or to one side, if not. Otherwise they will be run over by the many bikers!

A few blocks down is the water tower, of which there are many attractive ones around here. And just beyond that is a lovely little park along a small tributary of the river, lined with weeping willows. There are pathways along both sides; I see I’ve found an alternative walking/jogging path. There is the sweetest bridge crossing (picture above). I spied a man fishing, and I even saw a fish jump (although he didn’t catch it). Looming over the trees is the water tower.

On the way back I discovered a small garden maze near the water tower as well, buzzing with bees and butterflies. There are some benches to rest on, as I have found in all the parks here and along the pedestrian streets. They provide nice benches for the weary walker!

After this walk, I had a nice weiss beer at the local beer garden, as well as some pork, cabbage slaw, and the best potato salad I’ve had in awhile. The folks around here really take advantage of the nice weather with lots of sidewalk cafes and garden seating–so charming.

Alas, my street is also noisy, as is my dorm (periodically). There is a lot of traffic on both streets, for one thing. And this week there is a huge music festival going on in the big park, which has meant music wafting in all night (past midnight). And then there are the students, who begin classes next week. In Fredonia I purposely live far from the student houses, dorms, and pathways to the bars. So it’s kind of ironic that I am living in a dorm here. The drinking age is 18 here, so the students can drink in the dorm. They also drink outside the dorm, since there seems to be no real law against drinking in public, (or at least  not one that is enforced). Yesterday a group of students was walking down the street chanting and screaming at the top of their lungs. They seem to like to do that. The other night another group was playing soccer outside til quite late, cheering and screaming.

Last night really took the cake, though. They had what seemed to be some sort of welcoming party (at least I devoutly hope it was a one-off!) downstairs, which consisted of lots of singing, shouting, drinking, etc. I am on the first floor up, so needless to say, it was extremely noisy in my apartment. Around 10 p.m. this was accompanied by thumping dance music, which lasted until after 1 a.m. Yes, I had to dig out the ear plugs to try to get some sleep.  Ah, youth. I’m just hoping that once classes begin, they will be too busy to party (haha). I’m quite sure that many of the students are charming individually but they seem to be one loud screech (of the nails on a blackboard variety) as a group! Tonight, at least, it is blessedly quiet (for now). Keeping my fingers crossed this will continue.

Tomorrow I pack for Budapest. Going to the train station Sunday will afford me the first glimpse of the migrants coming through from Serbia. More to come on that.

One thought on “The Street Where I Live”