Last week (August 20) was the national holiday in Hungary, which commemorates Szent István (St. Stephen), Hungary’s first king, crowned in 1000 C.E. This was the founding of the Hungarian nation, so this is the main national holiday. Tidbit: István was also a Christian, and, according to my guidebook, required all Hungarians to get married! The August 20 date is the date that he was canonized (in 1083). So that is the history. How do the Hungarians celebrate?

Well, for one thing they put Hungarian flags up everywhere, and in Budapest they have both a cake-cutting ceremony, with a special national cake, and a procession of the saint’s right hand at St. Stephen’s Basilica. In Szeged, I saw many Hungarian flags on the Belvárosi Bridge that I cross each day. They also lay a wreath at István’s statue in Széchenyi tér, the main square in the center of town.

But the main celebration is a big beer and food festival along the Tisza River, featuring lots of craft breweries, as well as booth selling Hungarian wines and palinka (the traditional fruit brandy);  food of all types, ranging from Hungarian specialties to hot dogs and even “Texas Barbecue”; rides for the kids; some craft booths; and live music. 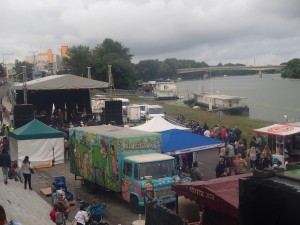 On the holiday I headed over for food and a beer or two, and the fireworks. I almost immediately saw a beer booth that had an IPA. What, an IPA here in Hungary?  I had to check that out. The friendly woman and man working there rustled me up said IPA, and it was quite nice–more of an English IPA than the American IPA I prefer, but nice just the same. The brewery, whose name I unfortunately do not recall, is near Budapest. Thus fortified with beer, I set off to find food. Such an abundance of foods, some mystifying (big tubular rolls that looked like some sort of pastry being grillled on a rotisserie?), others seeming out of place (Texas barbecue?), lots of sausage, salami, hamburgers, etc. I decided to try a lángos, which is a fried potato flour dough base on which they put toppings, generally including sour cream, onions (red and scallions), and your choice of others. I chose one that had salami (of course), cheese, and I think it also had tomatoes or peppers. It was sort of the Hungarian version of the Navajo taco. It was huge and quite tasty; I couldn’t finish it. (One thing I have found about eating out in Hungary is that portion sizes tend to be huge, as in American style huge.)  For more on lángos you can check out the recent New York Times piece.

After such a feast, I was ready for another beer, and this time I found yet another IPA brewed by Zips Brewery. This one was hoppier and quite tasty. Ah, but there were still a couple of hours until the fireworks, so I listened to the music for awhile, then went for a walk around the area, checking out the wonderful National Theater and the lovely Hungarian Secessionist Deutsch Palace, with its blue ceramic folk art-inspired tulips, hearts, and other ornaments on the facade.

I also saw the spirit of the river, a statue of a woman representing the Tisza, along the bank. Then it was back to the festival for the fireworks show and one more beer, this time a Hungarian lager; I’m not an American lager fan, but the ones here are terrific!

And oh, the fireworks. In the U.S. they tend to parcel them out one by one, with oohs and aahs at each. In Hungary they send up 10 and more at a time–some high, some low, different types. And they keep sending them up this way for about 15 minutes. It was fantastic!

Concluding thoughts? The festival was much like the many festivals held throughout the U.S.–food booths, rides, craft booths, music, groups of teenagers hanging out, children running around, and families strolling. What struck me as most different: the fireworks, as already mentioned, and the multiple booths selling alcohol, which you could walk around the whole festival drinking. No need to go to a restricted area to have a beer. And yes, I did go back a couple more times over the weekend for another beer or two, more music, and I even tried the “Texas Barbecue,” where the speakers play Johnny Cash and they have a smoker and sell ribs, pulled pork, beef, chicken, sausage, etc. I tried the pulled pork and they even served it North Carolina style (topped with coleslaw, add your own sauce if you like); it was pretty darn good, actually. And the sandwich was sold to me by a young woman who, it turns out, had spent three months working at a camp in the Adirondacks, so we chatted about her experiences in New York. And that was my first Szeged festival. The next one is less than two weeks away. I can hardly wait!

6 thoughts on “Szent István has a holiday”