These are a few of my favorite things. Yes, this is the first food post. Translated, those are “beer, ice cream, and Szeged fish soup.” All are superb here! I’ve been tasting my way around Szeged for the past couple of weeks, and there is much good to report.

The beer is excellent–generally lagers and pilsner styles, with some German weiss beers thrown in. Funny how all those styles taste so much better to me here than they do at home. I actually read today on a German beer site that the lagers and pilsners are more bitter, which may explain it. There is a bar or two that serve craft beers, but I have not gotten to those yet, other than to taste the craft beers at the festival last week. I favor the Dreher (a big Budapest brewery) Hidegkomlós at home; I picked it because it had hops on the can, and it doesn’t disappoint! And have I mentioned that beer is quite affordable? Along the lines of $1-2 per draft beer (for about a 12 oz. size); the most I paid was the equivalent of $3.50 for a large craft-brewed IPA at the festival. At the grocery store you can only buy individual cans, although a few imports come bottled. A half-liter can of beer at the grocery store will set you back about $.85.  A favorite late afternoon ritual here is to sit at a sidewalk cafe sipping a beer (yes, I have partaken in this ritual a time or two!). 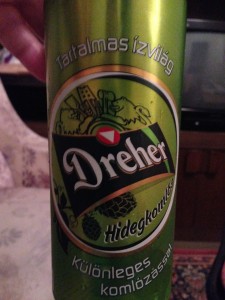 And you all know my weakness for ice cream, gelato, sorbet. I haven’t found much sorbet here among the gelato. They generally sell gelato, something called “desserts” which are fancier ice creams and cost a little more, and something mysteriously called “paleo” gelato, which may actually be sorbets. Not sure what paleo means, but I’m guessing perhaps uncooked. I have tried quite a few, because they, too, are inexpensive–less than $1 for one scoop, and less than $2 for two. My favorites so far are a fabulous passion fruit/raspberry and a cinnamon. It’s been hot, so some fagylalt each afternoon is a basic requirement!

As for the fish soup, Szeged is famous for this; in fact this is a popular dish around Hungary. But Szeged claims to have the best, because of the special Szeged paprika used. Szeged is one of the two big paprika growing areas of the country. Side note: it is amazing how many different varieties of paprika you can buy here–from mild and sweet to very hot, there are many gradations. Apparently what is distinctive about Szeged’s halászlé, aside from the paprika, is that it is always made with three kinds of fish. It usually includes carp and catfish, which are the main local fish, I am told, and also perhaps pike for the third. The broth is made with lots of paprika, also the actual peppers, some tomato, and some onion (paprika and onions seem to go on everything here). I tried some at a restaurant by the river the other day. The broth was amazing, and the soup was great. It comes in a giant bowl–this is not a soup you order for one person.

It must be shared! I’m very excited that I will be back from Budapest in time for the annual fish soup festival in Szeged next week. I will report on that afterward.

As for other tastes of Szeged: Salami is ubiquitous here; indeed, there is a large factory (Pick) in town. And the salami is quite good; believe me, I’ve sampled it (a lot!). There is always the Hungarian staple of gulyás (goulash), which I believe can be served as soup or more of a stew. I have had the soup, which consists of beef, vegetables, and some little dumpling noodles in a rich paprika (of course) broth. There is the lángos, which I described in an earlier post. I still haven’t tried the dough cooked on the rotisserie; it’s on my to do list. But I was introduced the other day to something called cremasnit, which is another Hungarian specialty (although apparently the Austrians and others also lay claim). This is a flaky pastry bar (huge) with a custard filling. Unlike some such pastries, which look great and disappoint (usually because they are too sweet), this was perfect and not overly sweet. I had this at a little pastry shop, where everything is made fresh daily. Indeed, there are many bakeries and sweet shops here, which are generally called “cukrászda” (confectionery). They often also sell ice cream at these. I have to say I have yet to taste a bad pastry here.

Soup: Midday meals often feature a soup course; all restaurants have 4 or 5 soups on their menus. Soup is called “leves,” by the way. Every soup I have had so far has been tasty; some have been superb. I’m a soup person, so this is wonderful in my view. It reminds me of when I went to Poland, which also had many, many soups. I decided then that my love of soup came from my Polish heritage.

Other food tidbits: If you go to a restaurant at midday, you can usually get the “menu,” which is a two or three course meal for a set price. This seems to range from about 900 to a couple thousand forints, depending on how close the place is to the tourist areas. 900 forints is about $3.50, by the way. The times I’ve had this, it has included a soup course and a main course. Sometimes it also includes a drink. Not bad at all! They also seem to love pizza here; there are a number of pizza places. The Szeged style pizza has salami (natch), onions, spicy local sausage, and cheese. Finally, one of my favorite meals here was not particularly Szegedi, but it sure was tasty. It was a delicious grilled salmon  over stir-fried vegetables, which included eggplant (amazing), zucchini, tomato, mushrooms, and others.

So, now you can see why I must walk several miles each day and jog in the parks! I’ve been eating too much! Actually, I’ve been eating big lunches and then having salad at night generally. So perhaps that helps to make up for the beer and ice cream, haha. I leave for Budapest in the morning, and who knows what gastronomic wonders await me there? I’ll keep you posted.