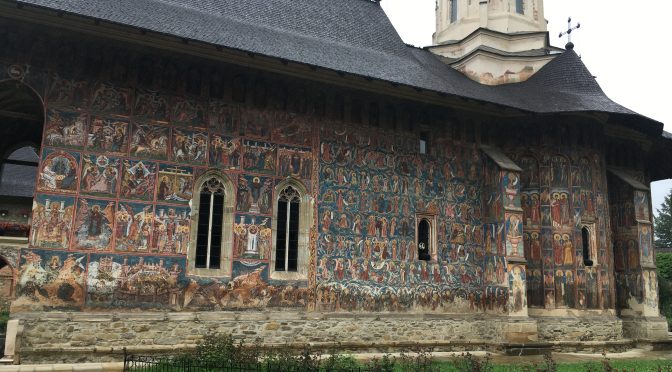 Romania is divided into three main provinces/regions: Transylvania (central and north), Moldavia (northeast), and Wallachia (south). The Carpathian Mountains form a sort of L shaped range in the middle of the country; hence,  we ended up crossing them several times. They are quite beautiful, as mountains tend to be (more on one spectacular drive later). The main attraction of our Romanian tour, however, was not the mountains but the churches and monasteries, particularly the painted monasteries. The first group were built by the Saxons and were Catholic, then Lutheran. The other churches and monasteries are all Greek Orthodox, the predominant religion of Romania. The churches we saw fell into three categories, distinctive by region and era, as well as ethnicity, in one case. They were certainly the highlight of the trip as well as its focus.

1. The Saxon Fortified Churches of Transylvania:

The first group of churches we visited were in Transylvania, which had a large German population in the Middle Ages through WWII. These were fortified churches, built between the thirteenth and fifteenth century. (These were, of course, Catholic Churches originally.) As the name might imply, they are churches surrounded by fortress type walls and sometimes even moats that could be flooded. Inside the fortress walls were rooms for each of the families in the town. The idea was that when the Tatars or the Turks or whomever invaded, the people would move into the fortified church. From the outer (and inner) walls they could shoot arrows, pour hot oil or other substances, etc. on the enemy. This was very interesting! The oldest one we saw was the Harman  Church, built in the 13th century.

The church features the remains of medieval frescoes as well. Its style is a mash of Romanesque, Gothic, and Baroque, as some parts were changed over time. We next visited the biggest of these fortified churches, the Prejmer church (14th-15th centuries), which had some 270 rooms for each of the town’s families. I walked inside the walls, where you can see the slits for firing at the enemy.

There was even a board with slots for multiple arrows so they had a sort of automatic weapon, medieval style! This was the most heavily fortified of the churches in Transylvania. Another distinction is its altar tryptich from the mid-15th century, the oldest in Romania.

We saw one more fortified church in Viscri Village (more on this place later), built around the 15th century. Here I got to climb the tower, which was a rather treacherous process with one stretch on uneven steps in the dark. I was rewarded with great views of the town and countryside, however.

We visited one final Saxon church, the Bierthan Church.

This stands on a small hill and has multiple towers. It was built in the 17th century and not fortified (the time for those had passed by then, with new types of weaponry I suppose). It was a beautiful church, however.

We crossed the Carpathians (for the first of several times) to reach Moldavia, which borders on Moldova. The painted monasteries were built mainly in the 16th century, under Stephen the Great to fortify the area against the Ottomans. Covered inside and out with brightly colored frescoes, these monasteries take your breath away. They are amazingly well preserved, in part because these churches were closed down for long periods during the periods of rule by the Ottomans, Austro-Hungarians, and communists. The southern exterior walls are best preserved, as the northern walls were less protected from the elements in the harsh winters here.  They have been painstakingly cleaned inside and out since the fall of communism and are just incredible to see. We visited the monasteries at Humor, Moldovita, Sucevita, and Voronet. Like the earlier Byzantine mosaics, the frescoes were meant to teach the illiterate congregation the lessons of the Bible. In most cases the paintings were the work of one artist (with apprentices doing much of the basic painting work). They also have color themes: Moldovita’s is gold, at Sucevita red predominates, and at Voronet it is the special shade they call Voronet blue.

The frescoes tend to have common elements.

Each church has an elaborate Judgement Day scene painted on the entry porch illustrating the fates of the good and the wicked, with Sts. Peter and Paul waiting to welcome the just into heaven. The best of these is at Voronet, nicknamed the Sistine Chapel of the East. The exterior walls feature processions of the saints, images of Jesus’s genealogy, and some unexpected elements such as the Greek philosophers and the zodiac symbols. According to Gigi, this is an illustration of earlier efforts to explain and understand the universe. The interiors include a painted church calendar, with each day illustrated, often graphically in the case of martyrs’ feast days. They also feature scenes from the life of Jesus and his crucifixion, as well as scenes of Mary’s life, and other biblical scenes such as Adam and Eve in the Garden of Eden.

Besides the spectacular Judgement Day fresco at Voronet, two other paintings stand out. One at Sucevita depicts the ladder to Paradise, with angels guiding the faithful up, but those who fall from grace are graphically shown falling into hell. The second is a scene at Moldovita of a 7th century siege of Constantinople, wherein the enemy is depicted as the Ottomans who were the current threat.

Of everything I saw in Romania, these churches were the things I would most highly recommend. They are simply stunning, even in the pouring rain through which we viewed most! Those protective big roofs also allowed us to view the walls up close out of the rain.

The final group of churches were in Maramures, a northern part of Transylvania, so it was back across the Carpathians to get there. This part of Romania borders on Ukraine, and features another unique type of church, wooden churches with tall steeples and interiors painted with vegetable-based paints. We visited several of these churches, including the largest one at Budesti, the tallest at Surdesti, as well as Nasterea and Desesti, which feature fantastic interior paintings (especially at Desesti). These churches also stood in the middle of cemeteries, which were interesting in their own right.

At Nasterea there was a fantastic carved cross, as well as paintings everywhere, including on the back of doors. My favorite was of St. Christopher. Desesti had the most beautiful interior paintings, however. Particularly striking was the depiction of the story of Sodom and Gomorrah, and the fall of Adam & Eve after the encounter with the serpent.

We cannot leave Maramures without mention of the unique “Merry Cemetery” (official name Sapanta). A local artist named Stan Ioan Patras began painting monuments for the people of the town who died. The wood headboards were painted colorfully with images of the person and poems that told, often humorously, of elements of their life, such as their love of drink and dance. Other times they are depicted at their work–at a loom, in the field, in a soldier’s uniform, etc. The poems sometimes tell of their sins as well.  Since Patras died, other artists have continued this tradition. Another custom on display here is that of depicting a Biblical enemy in contemporary garb. In this case, a WWII era cross at the entrance depicts German rather than Roman soldiers at the foot of the crucified Christ.