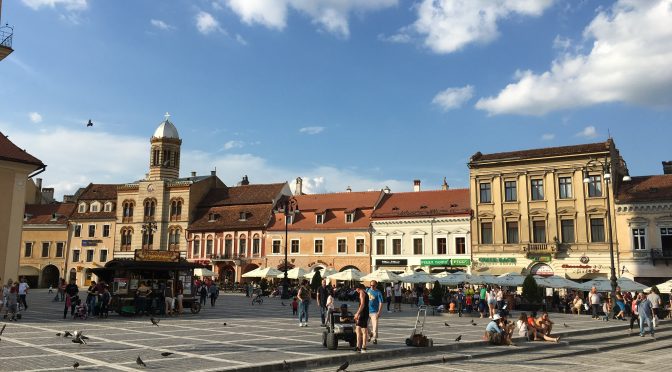 I flew into Bucharest and had lunch in the airport while I waited for Jean to arrive. At that point we found our guide, Gigi, who is from Bucovina (north near the Ukrainian border). We hightailed it out of Bucharest toward Brasov, which is in the Transylvania region, across the Carpathians (one part of them, anyway). The mountains are absolutely gorgeous. Unfortunately, it was a Friday afternoon and a holiday weekend to boot, and a few thousand Romanians had the same idea of heading for the mountains. So we traveled at a snail’s pace through several resort towns, but finally reached Brasov and our home for the next two nights, Casa Wagner, which is a lovely hotel in an old building on the main square. Absolutely beautiful town, although we didn’t really tour it. But we had dinner at a cafe on the square (tons of outdoor cafes). I tried the sarmales, Transylvanian style cabbage rolls, which came with polenta, which seems to be a staple here, interestingly. The cabbage rolls were delish, as was the Ursus lager I washed them down with. Our room was lovely but up a couple flights of stairs, including one which was a bit of a modified spiral staircase. Not  the easiest to walk up, much less bring luggage up and down! We made it with some assistance, however, and spent a comfortable night at Casa Wagner (two doors to the right of the church).

Brasov has a lovely central square with cafes, a clock tower, and beautiful buildings, including an Orthodox Church. There is also the Black Church off the square, which became blackened when the city burned at one point and has ever since been the black church. Unfortunately we didn’t ever get back to town early enough to check out the interior. From a watch tower outside the center, there were good views of the old and new city.

Gigi picked us up after breakfast, and we headed to Bran Castle (along with the vacationing hordes). We looked at it from afar; it really isn’t where Vlad the Impaler (I.e. Dracula) lived, but his grandfather did, I think. We started walking through the market toward the castle, but it transpired that neither Jean nor I fancied going to the castle, so we did not. Instead we bought some sheep cheese in little tree bark containers that are supposed to preserve it (let’s hope). And we had some tea in a cute little cafe.

Next on the agenda was Peles Royal Castle, built at the turn of the 20th century. It was quite beautiful and had rooms full of displays of armaments and armors, a library to die for, and Turkish and other inspired rooms. Interesting even if castles aren’t really my cup of tea. I much prefer the old churches, wandering towns, and folk culture and heritage.

Speaking of tea, I must say that strong black tea is hard to find in Romania. Good thing I brought some with me. Black tea is generally a fruit tea (forest fruits, e.g.) which was tasty but not breakfast tea, and Earl Grey, about which I feel the same. The only spots with good black tea were those places we stayed that catered to Germans, which figures, as Germans have excellent tea!

We had our first lunch stop, which became a pattern for us, of soup (ciorba) with a dessert. The soups here were good, although there wasn’t as much variety as in Hungary or Poland. The main types were a tripe soup, which I passed on, and sour soup with chicken (generally a good choice) or beef, mushroom soup in Bukovina, goulash soup in Maramures (heaven), a meatball soup, and a bean barley soup with ham (excellent version at the inn at Red Lake). Dessert today, as many days, was pancakes (their version of the palacsinta in Hungary), filled with jam or chocolate. Very tasty. Other desserts included this insane version of fried donuts with wild blueberry jam and sour cream on top. Excellent but they honestly must either share desserts or really carb load. The first time I had them they gave two (and they are by no means smalll); the second time there were three! It was really a waste of food, unfortunately. I cannot imagine who could eat all that! While we are discussing sweets, I will also say that I had an impressively good pain au chocolat at a gas station with a patisserie!

Final stop for our first day touring was the Sinai Monastery, built in the late 17th Century. The main religion here is Greek Orthodox, but in all the old churches the script tends to be in Cyrillic, as that was used in Romania until the 18th or 19th century when they adopted Romanian, a Romance language. I could pick out some words based on my knowledge of Spanish. This church had paintings on the inside and on the porch. The porch paintings are always of Judgement Day, showing heaven and hell. This one had graphic paintings of martyrs (heads chopped, etc.) inside on the calendar. Each of these churches seems to have a yearly church calendar, showing the feast days and such. Quite nice. The paintings here were done in the 18t C.

One more dinner on the square at the same place with our favorite waitress. More Ursus for me, and we both had trout for dinner (head and all).

Our friendly waitress took away the head and showed us the easy way to debone it. Very tasty fish! A fitting end to our stay in Brasov.